How to Become and Remain to be a Professional Singer in a matter of hours, and not months or years? 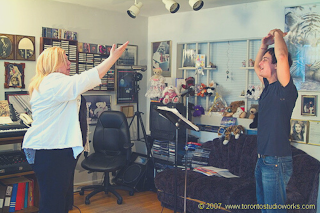 Since 1984, we have been receiving students who really wanted to make it in the music business.

And a lot of them did.


Many of them got signed with major record labels, as well as, had won many singing competitions including international ones.

To name a few, please see below:

At the time, (end of 80s until the middle of 2000s) I primarily dealt with professional or semi-professional rock and pop singers as well as wannabe singers like beginners and intermediate calibre...

Those years especially, our singing students were very ambitious and inspiring young people.

I have to say, that the people those days, in general, possessed enthusiasm and also, nonetheless, inspiration to achieve their desired success!


They were very motivated to reach their goals whatever it took...

They were not distracted by texts, emails and social media overall.

Nowadays, they are using the internet instead of their brains - looking for instant gratification, so to speak.

In a real sense, people are so busy now and nevertheless, lazy, so that they don’t have either the time nor the capacity to think and sort out their priorities.

In my opinion, the past years were the most glorious ones!!

But, let’s come back to the present…

Those ones are still willing to work on their craft to realize their dreams.

However, with the described above individuals, whom we attend to at the present time (but, unfortunately, much less than before), it’s still a pleasure to work with (just like it was before in a quite distant past...).

So, what will it take nowadays to become a professional singer?

The attendance, the compliance, full attention, the understanding of what the Vocal Science™ Method is all about and what it could do for them.

It, however, requires a lot of patience and, nonetheless, sound physical and emotional conduct.

The person of interest has to be completely open to constructive criticism, where some possibly made mistakes by them, will be pointed out and constructively addressed.

Our prominent newspaper the “Toronto Star” in 1999 wrote an article named “Coach Me If You Can.”

The author of the above-mentioned article also declared (after physically experiencing a glimpse of the Vocal Science™ Method) that it is "not for the faint of heart".

I added that it is also not for people with a below-average IQ...
Indeed!!

When the internet kicked in, I believe, it was presumed that it will be used along with human brains and not instead of them…

Unfortunately, it is not our reality today.

In 1994 there was another article written about me by the Brampton Gaurdian newspaper named: “Voice Coach Teaches A 'Mind Over Vocal Cords' Philosophy.”

I do agree with the above, as the whole Vocal Science™ Method is geared towards “mind over matter.”

If the human mind does not have proper “software,” but instead of the latter, has a “virus,” on their "human-computer", the voice will never work to its full capacity and definitely will not work upon the design and upon their sound (healthy and vibrant) brain command.

Nonetheless, in the above-described case, the singer will never become professional, as he/she simply will be unable to comply with standards of professional singing and many other aspects which are required for "making it", so to speak!

Thank you, my reader, for reading and understanding and following my drift.

There is more yet to come your way...

In fact... About the technical elements of professional style, we will elaborate in our next article titled:

"The Technical Elements of Vocal Style:

But… What about the Vocal Style?

Can it be taught?