Showing posts from April, 2013
Show all

The incorrect application of the speaking and singing voice... Does it always fall in the category of the Voice Repair? 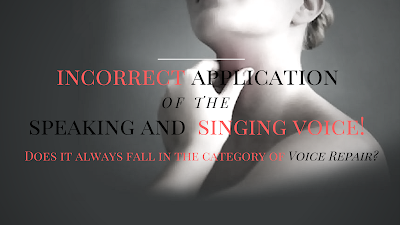 The answer to that question, luckily, would be no, not always. Sometimes, people using their speaking and their singing voices in the not exactly safe and correct manner. In fact, the misuse of the human voice begins from the lower drowned position of the voice, which also results in a lower volume, and quite often in a raspy sounding voice. In some cases, it’s just a result of the manner in which the person speaks, and there is nothing really wrong per say with the actual voice. Unfortunately, in North American Schools, nobody teaches children and later, young adults, how to speak, i.e., how to conduct themselves (posture wise) while speaking and delivering the message, how to articulate and pronounce and announce the words clearly, and also, with the proper emphases and inflections. If those components are not addressed, and thus, the voice is drawn deeply to the bottom of the vocal box, the person could experience an acid reflux, as in this instance, the voice
Post a Comment
Read more

April 17, 2013
Over almost three decades of the existence of my vocal school , I had in my possession, estimated, close to 20 000 students to date, and that not to count numerous workshops and seminars I've conducted around the world.   My "claim to fame" for all these years has been: Beginner to pro-singer in a matter of (ten or less) hours, and not months or years. Therefore, the turnover of my clientele (singers and speakers) was quite high and still is. Many people over the years were commenting that I was working myself out of my business, by producing very fast and very good results with respect of my singing and speaking clients' voices. However, the "quick fix", (not always preferred by my choice) so to speak, was not necessarily sufficient enough as it could have been, opposed to when the singer or a speaker for that matter, would give me and themselves more quality time than just for example only ten hours of instruction. Nevertheless, for some pe
Post a Comment
Read more

Vocally Speaking... "Music Menu" Singing is the last plate on the menu?

April 09, 2013
It never ceases to amaze me when people are only talking about the actual songs, i.e. how good they are, how original they are, how well produced they are and how catchy they are... Very rarely, you hear the comments about the singer, for example praising him/her about the strong vocals, about their vulnerability, original interpretation, perfect pitch, and overall perfect vocal performance delivery. How so you may ask? It should be two different commodities-the greatly written and produced song and well and professionally delivered vocals. Once upon a time, I had a meeting in a Sony building with a prominent producer and a manager to be for one of my clients. After we discussed my client, they told me a story which happened a day before my meeting with them. They, apparently, flew a so called artist from Vancouver, BC in anticipation to record the perfect original tune composed by that artist and then put it on the market. Little did they know... The so called artist co
1 comment
Read more

April 03, 2013
Due to the high technological era we are living in, I had to learn a lot, not only about the "human computers" (figuratively speaking), but also about the actual computers.  I have to note that I am old-school, so to speak, and when I was born in Russia (sometime ago, lol), we did not even have a rotary dial telephone or TV for that matter. Now due to absolute necessity, I had to "indulge" myself into understanding about new technological devices such as high-tech smartphones and of course the computers with their websites including newly launched of my own.  Little bit I knew...! Since my old website was working for over 15 years quite flawslessly, I had no idea what was driving that website and how people were finding me (all of these years I had young computer geeks working for me).  I had to find out the hard way now, as the new website was looking pretty, but nobody could find it.  It took me a month of loss of business to realize that something is not going ri
Post a Comment
Read more
More posts