Showing posts from July, 2017
Show all

Vocal Cord Disorders That Cause Voice Problems. Voice or vocal cord problems generally include pain and, overall, discomfort when you speak or have difficulty controlling the pitch, volume and quality of your voice overall, and your singing voice in particular. It may sound a little surprising, but it’s true that a variety of medical conditions are the cause of most voice/vocal cord problems. The most common cause of hoarseness and (generally speaking) vocal difficulties are outlined below. Some of the more common vocal cord problems include vocal nodules, vocal polyps, vocal cord paralysis, laryngitis and nevertheless, GERD.  Laryngitis  & GERD are often defined by a raspy/hoarse voice because of the significant irritation of the vocal cords. Overuse or misuse of the voice, inhaled irritants, or GERD reflux (the backup of stomach acid into the throat) are some of the big reasons for it. Vocal nodules are (most of the time) benign or noncancerous gr
1 comment
Read more 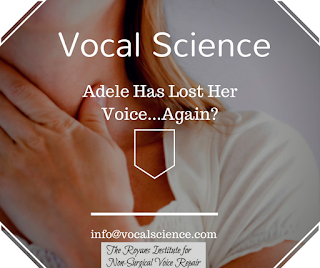 - Yes... She was forced to cancel the rest of her tour! - You may wonder why this had occurred one more time again…? That happened because if nothing gets changed with respect of how the artist is using his/her voice, it will inevitably reoccur again and again… unfortunately. The very first time it happened to Adele was in the year 2012 . At that time, losing her voice, she had to cancel her concerts and tour dates due to a bleeding polyp on her vocal cord.  She was transported to Boston, US, to undergo a vocal surgery which was successfully completed by one of the renowned ENT specialists. Adele was not allowed to speak for 5 months after the procedure. After that, her voice healed and returned “back to normal”, and thus she was scheduled to perform at the upcoming Grammy awards.  Right before that, she was interviewed by Anderson Cooper and during that interview, she was asked if she thought whether or not that could happen to her ever again? Without any he
Post a Comment
Read more

Voice Repair - Who Needs It and Why?

July 10, 2017
The Right and Healthy Modality of the Vocal Behaviour for Non-Singers. Being in the music and voice business for over four decades, I've met a lot of people with good voices, bad voices and also, so to speak, broken voices.  Some of them were singers, some of them had nothing to do with singing. Those who had nothing to do with singing, however, had a lot to do with a lot of speaking; and thus sometimes, they had been forcing their voices out and screaming from the top of their lungs and from the bottom of their throats...(basically, purely screaming)! Outside of the regular people, we are also talking about some professionals like: fitness instructors, martial arts instructors, teachers, lawyers, crown attorneys, public and motivational speakers to name a few. Due to their occupational (in a manner of speaking) hazard, they have been forcing their voices to serve others and one day, someday, their once precious voice seized on them "unexpectedly and out of the blue&q
Post a Comment
Read more

Once Vocally Impaired, Should They or Could They Continue Embarking Further on their Vocal Drive?

Nevertheless, I have been getting a lot of calls regarding the non-surgical voice repair program. The people who are inquiring are usually very desperate and very emotional, which is quite understandable. They're pleading for help and, at the glance, appear that they would do anything that would be required from them; would drop everything and anything (including their vocal and voice performances) and would rush to Toronto to fix their voices in order to continue their performances, recordings and whichever other careers which are directly connected to their voices' health and their overall well being. Some of them are diagnosed, some of them not yet, and some of them are hiding their diagnosis (to my dismay...) But what is more surprising is that a lot of them are till singing (more like faking) and thus being in denial, while at the same time, their singing (and voices in general) and quite compromised! Go figure! They are actually singing on their nodules and p
Post a Comment
Read more
More posts