Life-Altering Information On How To Fix Your Voice, Unique Instruction And Natural Treatment, Could Make A World Of Difference!

When the person ends up with some voice/vocal disorder, his/her life is definitely altered in one way or the other. Just like a person who, after the tragic accident, became disabled, his/her life would definitely take a drastic turn. Now those people had to learn how to live their life in a wheelchair and adapt the use of even basic life essentials to their limited mobility.

Conversely, the person who was using their voice a lot (and perhaps excessively loud), who also was very communicable and social and who is now (after the voice/vocal injury) unable to use their prime tool of communication (their voice) the way they had been accustomed to, will also have to adopt their life to something different other then the life they were used to.

Sounds quite tragic, doesn’t it? For some people, it is a tragedy, indeed! The vocally-injured person is not only effected by the constricted/limited use of their voice, but is also effected emotionally, a great deal. For people who are not singers, It appears to be even more tragic then for singers, as singers (on the back of their mind) always expect that something may happen to their singing voice at all given times.

As for speakers, it comes as a bad surprise and sometimes, as a total shock!

None of them could even imagine that they could lose their voice and become, nevertheless, vocally impaired. They become extremely scared, as they have no information whatsoever on how to go about regaining their voice and reclaiming their life back. Obviously, they have to get the viable information on what else to do outside of their physician and the ENT specialists.

Unfortunately, the above aforementioned “specialists”, in majority of cases, do not really help outside of some diagnosis (not necessarily always accurate) and or suggestions to undergo the surgical treatment, regardless if it’s needed or not.

Those countries like Canada and the UK have so called “free medicine”. In other words, the patients do not pay directly to the doctors from their own pocket. Those doctors get paid through the taxes which the majority of the population is paying through their income, to the government. Interestingly enough that some people do not realize the latter and they think that the best way to go about their health issues (voice issues included) is to obtain “free” medical expertise and treatment. They are unable to accept the fact that there are alternative ways which could help to rectify any of their problems (voice/vocal included) with much less invasive means.

However, for the above services, they will have to pay from their own pocket…

Thus, before they agree for any suggested-to-them invasive surgical procedures, they should consult an alternative speech/singing specialist and get their opinion. With that said, the proper and adequate information could be worth as much as “gold”.

The alternative speech/singing specialist  will show them the non-invasive route how to fix their voice non-surgically (where it is possible), by obtaining a very unique voice/vocal instruction and adopting the use of natural herbs and homeopathic remedies.

In a nutshell, when via special speech and singing exercises, the voice gets lifted off of the vocal box and off of the vocal cords, the space for healing in one’s vocal anatomy becomes available for the natural remedies to work in its fullest capacity.

Evidently, the pressure of the sound will not be there any longer; and thus, the healing will begin. The voice will be operated from a completely different set of muscles (the facial muscles). The abdominal muscles will be trained to become stronger and stronger to be able to support the physical sound, to be lifted and thus fly in its full capacity to its aimed destination.

Needless to say, with this method, any pain or strain on the vocal anatomy will be completely eliminated.

Taking the latter for consideration… It would make a world of difference!


Isn't that  the name of the game? 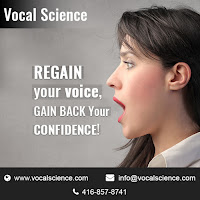 Diana Yampolsky is the Master Vocal Coach, Studio Vocal Producer, and Non-Surgical Voice Repair Specialist at The Royans Professional Vocal School  and The Royans Institute for Non-Surgical Voice Repair, in Toronto, Canada and worldwide. She is the sole creator of the Vocal Science (TM) method - Trademarked with the Government of Canada.
If you would like to stay up to date with Vocal Science news, Subscribe to our Vocal Science Newsletter (Located HERE). You can also follow us on , Facebook,Twitter and LinkedIn.

If you find yourself struggling with voice/vocal performance or are in need of non-surgical voice repair, you can reach Diana Yampolsky personally via email (info@vocalscience.com) or phone, (416-857-8741)