Singing Voice And Speaking Voice: Color, Pitch, Tone... Can It Be Improved, Enhanced or… Outright Changed? 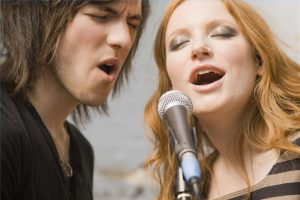 A couple of days ago, I received a phone call from an 18 years old man who was asking if I could completely change his voice, (surgically, or non-surgically LOL), so he could sound like a certain rapper…? I wasn’t quite sure what to do… to laugh or to cry…

The question was funny, to say the least, but the issue was sad, as, at 18 years of age, he was still very naive and simply foolish, to put it mildly. In our, so to speak, technologically advanced age, he sounded like he had no slightest idea about this world and how it operates, let alone about the human voice and what triggers it to work in a certain way.

I always said previously that the voice, like fingerprints, does identify the person, as each human being has their own unique voice, which, in turn, most of the time, also reflects the state of their being.

Could that be completely changed or modified, you, my reader, may ask?

The answer for the former: “No, like fingerprints, it cannot be changed.

But the answer for the latter: Yes, it could be somewhat modified and enhanced”.

For example, somebody speaks very nasally.

Could it be corrected?

I usually treat the nasal congestion with herbal and homeopathic remedies and then restructure the voice to the facial muscles and away from the nose. It then sounds wider, rounder and full-bodied and definitely not ‘nasally’ anymore.

Also, let's say somebody speaks too high or too low.

Could that be addressed?

When I work on a wholesome mechanism, which allows not only for the voice to work in the fullest capacity possible, but also, concurrently, puts that voice in a complete balance, i.e., for those who sounded too high (primarily males who never really came out of puberty), after adapting Vocal Science™ Method and its very unique technique, such people acquire a significant bass underneath of their high toned voice.

Those who speak very ‘bass’ie’, (men and women), begin to sound much more balanced and also consistent with the size of their physical bodies. In my practice, I had petite women who spoke with the low baritone voices, and quite short and, not necessarily masculine-looking men, who also spoke with a low baritone or bass voice.

That type of thing could be modified, mainly balanced to the gender and, as I pointed out before, to the size of their bodies. As for singers, in the majority of cases, their singing voice could be exponentially enhanced with respect to the tone, colour and fullness of their voice.

Once the voice is properly supported, structured, placed and projected, it begins to sound much more clear, much more articulated and much more full bodied. Of course, there are better quality and not-so-good quality singing voices I had been working with over many years.

If the person’s inner energy is quite heavy, the voice also sounds less flexible and yes, sometimes, heavy-duty. In this case, I definitely have to work on the person as a whole to lighten up his/her energy and, sometimes, release the grip that they could be carrying since their childhood. Some voices are sounding too light and, in this case, I have to build a solid foundation underneath the person’s voice.

Usually, these types of people lack the overall confidence, which, quite amazingly, grows along with their voice development. Needless to say, without the needed confidence and a strong thriving voice, it will be quite difficult to realize their dream to become a professional performer/speaker/singer.

The conclusion of it is: