This is your riddle: You Have Voice Damage… How would you choose to fix it? 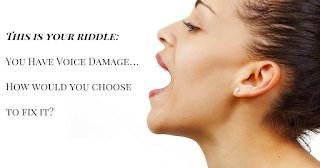 Given the nature of our business, we, of course, have been receiving numerous inquiries with respect to damaged voices which include:

We, of course, begin the conversation with trying to bring to those sufferers’ understanding that, unless they would change the application of their speaking and/or singing voice, the non-surgical voice repair will not be possible.

By the time they call us, many of them have already been attending conventional speech therapy and contemplating some homeopathic treatments.

Needless to say that none of them achieved any desirable results.

Usually the voice damage occurs when a wholesome voice mechanism is not in place. The breathing is usually very-much-so compromised or hardly present at all.

Similarly, if the car does not have the fuel to run on, it will not take the driver places. If also the essential components located in the hood of the car are nonfunctional, the car, most likely, will not turn on. Yes, of course, you can tune up the car, put the expensive lube and oil in it and then even wash it, wax it and polish it. With all of the above done, but with the engine broken or one of their parts like the alternator or the fuel system are not intact, the car still will not take you places.

So with the above stated, neither the homeopathy or the other alternative remedies will fix the voice damage on its own.

First and foremost, the mechanics of the voice have to be restored and put in complete balance with the physical body. The sound, as a physical material body, has to be addressed and its movement has to be defined; taking into consideration the proportions and parameters of one’s physical body - height, width and centre.

The emotional makeup of the individual also has to be taken into account, as the restoration of the voice is indeed a delicate matter and could induce the “rainbow” of emotions. That’s where the holistic approach to Voice Mechanics and the person as a whole takes precedent.

The whole process is definitely not for the faint of heart.

So if the person with voice/vocal problems is strong-willed, balanced and thus determined to conquer all of their voice issues, it will be done! However, it takes “two to tango”… The voice sufferer has to be extremely compliant with the instructions and not only during the studio/clinic time, but also outside of our facilities.

In fact, I would like to share with you what happened today earlier in the morning during my session with one of my voice repair clients. She walked in with a hoarse and raspy voice. And when I asked her what happened and why she sounded like that, my “doomed” voice repair client admitted that she felt quite a bit of improvement in her voice from previous sessions and treatments, and thus… could not stop talking…

She also revealed to me that not only she was speaking all day yesterday at work, but also spoke to her cousin for over two hours last night…? However, needless to say that, two hours later, she left with a restored and much clearer voice - not to mention hopeful, happy and excited. So she was given specific instructions to “hold her horses” and speak in moderation at work and at home.

I gave her a ‘pep talk’ about athletes being injured and recovering in rehab, and probably not contemplating right away running the marathons or jumping triple axels immediately after they felt a little better.

However, a couple of years ago, in one of my previous blogs, I highlighted a story of our Canadian figure skater named Kaetlyn Osmond 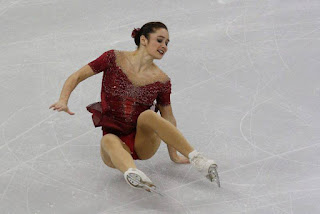 She was injured a few times and one of the times she left her treatments way too soon and enrolled herself straight to the competition. Prior to her injuries, she took the world titles and multiple other tiles. But that time, not being healed completely, she had fallen at least three out of four times while attempting difficult jumps. To put it simply, her foot and her leg were still too weak and could not hold the weight of the body to land the jumps properly… t was indeed very painful to watch. 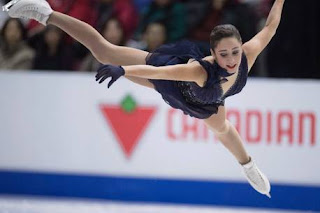 However, thanks to her coach who nurtured her back to health and retrained her to become an even stronger skater then before; and as a result, she won Bronze medal in this past Olympic Games! Way to go Kaetlyn!

Yes I am very much so for the use of the natural herbs and remedies, however, a little less fond of the use of homeopathic remedies.

But, yet again, Kaetlyn, for example, had a broken foot and a broken leg. So no herbs or homeopathic remedies would be able to heal such damage, as her problem was also mechanical. In her case, she required surgeries to put the mechanics of her limbs intact. And yes, of course, along with that, the above mentioned remedies would be very instrumental with respect to the actual healing of the injury.

Similarly, once the mechanics of the voice (in this case, non-surgically) are restored, the proper natural herbs and remedies will be administered to heal the throat flora, to get rid of the impurities and strengthen the vocal machinery.

Now, my reader, I would like to know what your wild guess would be…?

Please don’t hesitate to write to us and express your valuable opinion. And if you have any questions or concerns, we will also be happy to address them.