By the common opinion, they hardly, if at all, can restore a speaking voice, let alone a singing voice.

Usually what brings speakers and, moreover, singers in trouble, is overuse and improper use of the voice which could, no doubt, lead to a mechanical problem within one’s vocal anatomy.

And thus, the voice, (speaking and or singing), becomes dysfunctional.

The Singers especially need to recover their voice mechanics and none of the registered and non-registered speech therapist had been trained to do so. However, lately, (must be due to the recession), those troubled singers are having wild fantasies of using their (or their spouses’) insurance, trying to appoint a speech therapist to work on their SINGING VOICE!!!

Clearly they're upset minds do not allow them to think straight and the only thing they could think of is how to save money, instead of how to spend money wisely to get what they are after - their new healthy and rejuvenated voice and the knowledge of how to preserve it for a lifetime!

This past July, I received a client from Florida, US who, prior to booking my services, advised me that she is a teacher and she has been experiencing strained and hoarse voice and difficulty speaking all day and attend to young children.

By the end of the conversation, Holly had said: “ I like to sing too….” I didn’t think much of it, as I presumed that she was mainly coming to work on her speaking voice. Then Holly arrived to my Group Exploratory Session. And when I asked everybody to introduce themselves, (stating who they are and speak of sing their peace), she suddenly started singing a peace from the musical “Put On A Happy Face!”.

I was thoroughly surprised, as I had never expected that!

Holly was just very lucky as, needless to say that ,besides me being able to restore her speaking voice, I have had an extensive experience in teaching and developing Artists of all and any imaginable genres and musical theatre was one of them.

Imagine if she had just landed at the regular, (perhaps registered), speech therapist’s office?

Maybe, just maybe, she would end up having a slight improvement in her speaking voice but, obviously, her singing voice would not even be up for discussion, (or on the radar for that matter).

Please take a look on the before and after instruction video of Holly Rubich.

Please also read her post-course letter below and you will get the picture (no pun intended).

“First of all, I had a lot of hoarseness in my voice, which had cleared up after the first 10 hours I took in July with Diana.

Not right away, but when I got home I said something to someone about it. I said, ‘hey, I just realized that my hoarseness is gone!’ That was it! 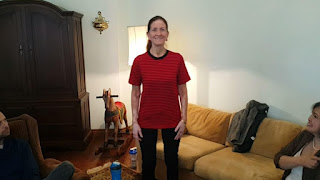 I said, ‘Wow’! And it was exciting to think about coming back to work on my singing voice, which is what we've done for the past 28 hours. And it has been just a series of layers of putting on more and more understanding and then, eventually, putting it all together. We had some very exhilarating moments. In fact, it is exciting to know that it feels like I have all the tools. So now it's just a matter of practicing and, possibly, coming back again to deepen that and further study to make it more solid.

I hope that I made my point clear.

The moral of it is: Stop thinking of the money to be spent. Start thinking what you are going to get for the money spent.