Vocal Science™ Technique... Virtually?? Is that even possible? If so, could that be Executed Effectively?

May 19, 2012
Needless to say, on an everyday basis, I have been getting a substantial amount of e-mails with the inquiries about my private services, group workshops, books, herbs, and what have you.

As technology is progressing rather rapidly, more and more inquiries are about whether or not they could sit at home, stare at the computer and nevertheless, not only learn how to sing professionally, but also fix their quite substantial damages in their vocal anatomy...? Go figure!

It never ceases to amaze me how naive and, I'm afraid to say, ignorant some people are.

They absolutely have no clue that the voice is a part of their anatomy and overall physiology, not to mention, it is also a big part of their emotional make up.


For the record, my own approach is very holistic to the voice mechanics and to the person as a whole.

In my opinion, the person, speaking or singing, represents, so to speak, the “instrument” and the “player” at the same time.

That said, the certain posture should be conducted to achieve a maximum result, while producing a speaking or singing voice.


With that said, a certain body position and the posture in particular should be properly conducted in order to achieve a maximum result i.e. the ultimate health (vocally speaking and otherwise) and needless to say, the best quality of speaking and/or singing voice.

Let's visualize a violin player who holds the violin upside down, or crooked for that matter. 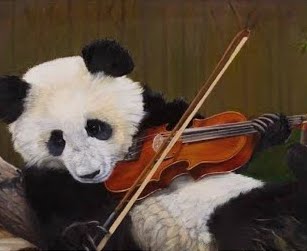 I don't think, in this instance, the player, to begin with, will be hitting the right strings and thus, produce pleasurable sound for the ear….
The danger of the above is also that the player will strain his neck, his arm and his back, while playing incorrectly.

In other words, the physical body of the player will be in jeopardy and the musical performance will definitely not be up to par.

Similarly, when I work on the speaker or singer and especially on their already pre-damaged or damaged voices, I need to assure that they are in person - physically present directly in front of me.


During my instruction, I employ quite a bit of physical activities, which allow me, by using body language, to bring the body and thus the voice in complete synchronicity and balance between each other.

It also allows me, via body response, to see exactly where my student/client is at, and direct him/her to the right conduct of his/her mind, body, soul, emotions and thus, his/her voice as an outcome of the integration and synergy of all of the above listed components.

I “instill” in my performer a wholesome “mechanism”, which consists of lower abdomen and upper diaphragm support for the voice to be lifted off of the physical body, in order for the sound to get projected to its aimed destination.

I also employ facial muscles, which play the role of the natural amplifier/resonator to work in full conjunction and coordination with the abdominal muscles.

I assure the structure of the sound, taking for consideration the central line of the human body (nose, belly button parameters).

And lastly, a very subtle, almost like fine acupuncture points, placement of the voice to the facial/sinus cavities, where the voice gets harboured and secured in its position.

Could you visualize all of that to be done virtually via Skype, WhatsApp, Facetime etc.?


I suppose, if you can visualize ballet lessons, gymnastic lessons, chiropractic or acupuncture treatments done virtually, then so be it…

In other words, if you are looking for the real thing, you have to be really present in all aspects of that word and in every conceivable way.

If you are looking for a magic pill while you have a severe growth on your vocal anatomy, or a DVD with the instruction, which is not interactive and even if completely right, is still one sided, or you think that your virtual presence is good enough, please make sure that you will block my e-mail address and never will dial my phone number.

On a positive note, I do hope to hear from you, via phone rather than via email, especially if you are facing a fear of otherwise never regaining your previous voice.

In this instance, I at least could hear the sound of your voice and thus will be able to pick up on your emotion, which is also important for a future success of our mutual vocal endeavour.

I mentioned the emotion in my previous paragraph and I would like to elaborate on how the person’s emotional state, especially of the voice repair client, could play a positive or sometimes, unfortunately, a very negative role.

In this day and age, people are obsessed with technology and paranoid of scams.

They suspect everybody and anybody, while in turn forgetting that they are the ones who need help, and not the other way around, at least from where I sit.

They insist on virtual lessons and actually condemn me for not agreeing to do so.
In some cases, no explanations as I gave in the above paragraphs, or even more explicit elaborations, would make sense to those troubled (in my opinion, by that point, on every level) people.

They're screaming for help, but in a real sense, they don't do much to receive it.

Some of the singers point out on a busy performing schedule, while having a few nodules or bleeding polyps on their vocal anatomy. That's how they justify why they can't reach me in my studio and only could do virtual sessions at best.

From my side, I sincerely wish them all a speedy recovery with whichever means, however, while at it, I suggest that they should also consider seeing a psychiatrist, who also, no doubt, will concurrently perform their head examination (lol).

Since, especially nowadays, a lot of people, so to speak, lost their orientation in this life.

So my suggestion is to book the above described appointment, quite in advance, as I presume that the line ups will be as long as the ones to get the COVID vaccination(s).

Why not, as some of them are insisting instead of a voice specialist - who would actually do the work on their voice mechanics and nonetheless, themselves (holistically speaking), to see a chiropractor, osteopath, and perhaps even a gynecologist, or proctologist... to heal their voice problems? Lol…

As I always say, “that would be funny, if it wasn’t so sad”!