The True Story - Case Study: From Complete Voice Repair to a Professional Singer in 4 Days and in 10 Hours!

May 12, 2012
Several months ago I got a phone call from Calgary from a professional musician, who sounded quite hoarse and raspy.

Like everybody else, he nearly interrogated me over the phone with the details concerning my course and especially with the payment for the course.

He did not commit for anything at that time, and I completely forgot about it, as I have a lot on my plate.

About 4-5 weeks ago, I received a call from him again, reminding me that he already has spoken to me and in the interim, pulled inside and out the whole internet, got at least two testimonials provided by my office of the people who just experienced the same, or similar, voice problems, and then came to the conclusion that apparently, nobody else is offering non-surgical voice repair and, on top of it, in the nick of time.

You would think that after this comment, the person would beg me to accept him on my Super Accelerated Non-Surgical Voice Repair course as soon as I would be available, but unfortunately, not at all, at least not in the time frame that I expected that.

The phone and text messaging interrogation began all over again, and... with more intensity...?

Meanwhile, out of the goodness of my heart, I have offered to this musician a tax exemption ($455 nevertheless) and I also offered a non-surgical voice repair kit (value of $250 with explicit instructions), as it plays a very essential role in the voice repair endeavour, and to top it all off, I offered a free copy of my book "Vocal Science - Flight to the Universe" (value of $35).

Nothing seemed to be good enough for my opponent.

When I hung up the phone, I found that I felt frustrated and right in that instance, I wrote to him a text message stating that I am no longer interested in providing my care to him, as I felt frustrated, interrogated and disbelieved.

Almost immediately after, I received a response from my troublesome client to be, pleading for forgiveness and promising, almost on the Bible, that he would never bring up any money or any disbelief in the equation, if I would be kind enough to accept him.

It took me a day to decide whether or not I should attend to his case. I slept on it and decided to give him another chance.

This past Tuesday, May the 8th, he had arrived in my studio.

I ran my first two and a half hours of voice treatment and instruction, and almost immediately after, got a text message from him, "I had a great time today, Diana. I feel like we are making some real progress already. I can't wait to see you tomorrow. Thanks again."

I responded, "Thank you Man, You are great! The best is yet to come! Don't forget to "smile and bite" at all times lol. Diana."

His response was, "Haha".

He says, "Ya. It felt casual and yet very aggressive. Just perfect for a Leo Musician. See ya soon."

I responded, "Thank you for a great output. I told you one day I may use you as my spokesman. I love my fellow musicians. I have a special spot for them in my heart. Remember, I came from the same clan. Read the book and you will find out more about me."

My client said, "Thanks again for an inspiring day. It was over too quickly. I can't wait to get started again tomorrow. Have a great night. See you soon."

I said, "Thank you. Jamie (my assistant) could not believe your singing today. He said it was much better than yesterday. Way to go man! See you tomorrow. Best, Diana".

Yesterday - on the fourth day - we concluded our voice repair course with the absolute up to par professional singing with no trace of damage anywhere to be heard.

At the door, I did ask my client if it was worth it to come all the way from Calgary and pay $3,500. He responded that no amount of money would appreciate the value of the experience and the result he acquired during these past four days.

In the past, the doctors told him to take a vocal rest. I asked him if it helped. He said, "No, it became worse".

Here, we had sessions of speaking, singing and taking natural herbs in between for two and a half hours on end on each day and the voice was becoming better and better in both instances, speaking and singing.

As a side effect, this singer has become by far more professional with respect of the application of his voice, but most importantly, his voice is assured not to experience any damage ever again.

I did advise him though, that this course was conducted in a super accelerated manner, and he should come back at some point and time for a maintenance to assure the healthy and lengthy voice for life. 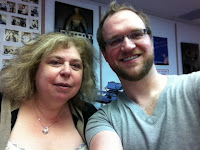 "Thanks for everything, Diana. I'll be in touch."