Let me tell you, my reader, that music is often called the world's greatest communication tool. An effective piece of music crosses national boundaries, and a good song transcends any language barriers. With that said, a common problem that I have found which afflicts many aspiring singers is that because they do not realize that singing is a great vehicle for communication - ideas, emotions, lust, pain, frustrations, love, etc. Through singing, you can communicate those emotions more efficiently and also, more personally than with any other art form - be it film, writing or dance.

But, evidently, not everybody is able to effectively communicate a story through the musical form.

Some of the artists, unfortunately, appear truly self-absorbed, self-centred and purely egoistic, to even being able to share themselves with the audience.

Needless to say, that they are primarily thinking only about themselves, their appearance and their voice.

That's what I call "Vocal Narcissism."

For those who are not familiar with the term 'narcissism', I would like to explain its meaning. It actually comes from a Greek myth; Narcissus was a beautiful youth who refused the love of a nymph named Echo. In punishment, the goddess Aphrodite condemned him to fall in love with his own image. Forced to gaze constantly at his reflection in a clear pool, he dwindled away and then died.

Quite a few modern-day "Narcissus" have passed through my studio throughout almost 4 decades that I have been teaching. Those types of students have been amongst the most difficult pupils in terms of reciprocating my, however, very unique vocal technique. They have been so self-absorbed with the sound of their own voice, that they actually forgot the need to communicate their message to the audience (or even to me, for that matter).

Not too long ago, one of the major record companies sent me a student who had a lot of natural singing talent that needed refining. It was clear from the moment he opened his mouth that he had a truly beautiful voice and it was also obvious that he had absolutely no idea how to use it. (Although the above-described fact was obvious to me he, himself, was completely oblivious to it!)

In many ways, his singing was like a form of vocal self-satisfaction; he was satisfying himself, but not his audience (in this instance I was his audience) and it was clear that he didn't even care who was in front of him.

The egoistic approach is the worst approach to singing because it separates the singer from the audience rather than bringing the two together. You could actually hear the conceit and arrogance in his singing, not to mention, that the lyrics of his songs sounded insincere and inauthentic.

In previous articles and in my first book, Vocal Science - Flight to the Universe, I have always stressed that the best singers naturally are willing to give and share part of themselves with the listeners. This student was the exact opposite; he was only concerned with his own needs and not with what the audience wanted or needed.

The reason that he was difficult to teach was not that he was unintelligent or untalented. He (as I mentioned before) was actually very smart and musically gifted. Instead, the same conceit and self-absorption that prevented him from sharing himself with the audience, also prevented him from more easily receiving what I had to offer. However, with my extensive experience (and, over many years,  having witnessed many other "vocal narcissists") I was able to get through to him and teach him everything I had to offer. Needless to say, it was a very exhausting experience and, nonetheless, it took a lot out of me.

Nowadays, it has actually become much worse.

Some students/clients stand in front of me like they have been turned to stone (by Medusa). 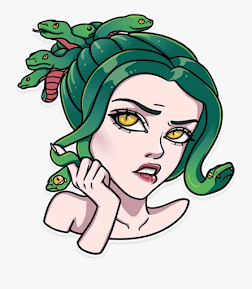 I've always been communicating quite a bit with my students, and even (when was needed) advising them on other aspects of life (outside of but related to singing).
I've noticed that the communication between my students/clients is lately ceasing exponentially.
They stand in front of me like stone monuments, whereas, in comparison, the people in a coma have actually more vital signs than some of my clients possess.
How in the world are they trying to become artists?
Beats me... and, moreover, never ceases to amaze me!
They do not understand my jokes and my humour in general, or even if they do, they do not react to any of it like people always did before.

Some of them appear almost unconscious and somewhat frozen...?

Whatever happened to humanity?

Is that a pandemic fault? Maybe yes, maybe no... In all honesty, I did notice the above-described behaviour of certain people even sometime before.

I have to say that almost 4 decades later, it is still quite shocking to me.

If by any chance, it doesn't, then at that moment we will know that the world is truly ending (Armageddon).

Vocal Narcissism is very sad if it remains "untreated," because it is much like a beautiful instrument that is being played by someone who doesn't know how to do it justice. I have a wonderful, unique piano in my studio that I brought with me from Russia over 40 years ago. By itself, it is only a piece of furniture. It takes a really good player to do it justice - the player who is able to extract the maximum capacity of this instrument. As I always say, it takes two - the instrument and the player to achieve what I call 'A total performance'. A naturally beautiful voice is very much a gift from God, and it is indeed an 'instrument' for communication through vocal performance.

"Vocal Narcissism", most of the time, results in singing that will leave the audience unsatisfied despite the fact that the singer might have had a beautiful voice, but, on the other hand, happened to be not an adequate 'player' of his given to him 'instrument'. All of that is because there is only one-way communication happening and only one-way satisfaction taking place - clearly "screaming" out "Me, Myself and I... and... MY VOICE!".

It's time to wake up people because if you don't, you might miss out on beautiful things...

Please see below and take it to heart: