Attention Spasmodic Dysphonia Sufferers: We can assure you that there is hope for a full recovery of your voice - in most cases! 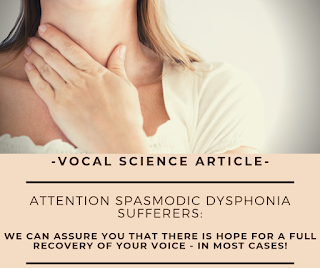 Please read below the synopsis of our present voice repair client and SD sufferer, Tanya G.

We have just received a client suffering from the Spasmodic Dysphonia voice disorder. She came to us (just 4 days ago) from another side of the planet - New Zealand! We’ve learned that it took her over 22 hours to fly to us - to Toronto, Canada.

To date, Tanya, under my thorough guidance, completed 20 hours of a very intense voice instruction coupled with a natural herbal treatment. In my estimate, our client’s Spasmodic Dysphonia disorder originally was determined to be between stage 1 and even possibly 2.

In my previous blog about the same voice matter, I specified that in “my books”, this very nasty voice disorder possesses 4 stages, whereas the stage 3 and 4 could be somewhat treatable, but usually never curable (at least to my knowledge and experience).

Tanya and I are working very hard, executing very detailed instructions (bringing it almost to forensic science)… The process involves a lot of repetition of the new sounds’ formation. First and foremost, we have to knock down all the bad habits and establish new healthy ones. It involves the establishment of certain positions of the mouth, lips and tongue, coupled with the proper posture of the body. The Vocal Science™ method is a unique intellectual and intelligent method of visualization.

I have been using a developed-by-me diagram of the physical sound, which reflects its movement and direction. For greater clarity, I’m also using laser light, showing exactly how the physical sound travels in a circular direction, relatively, prospectively and respectively to the person’s height, weight (body of the sound) and central line of one’s body parameters (nose and bellybutton).

Such unique instruction is coupled with certain body movements to use a body language to put the person in a prime position, utilizing their (so to speak) “instrument”, which allows them to use their intellectual abilities in integration and synergy with motor skills - and thus achieve the aimed destination of the sound, now being harboured in a completely different set of muscles (facial cavities, working in full conjunction and coordination with the abdominal muscles). The latter allows the sufferer’s voice to move freely away from the lower throat position, while concurrently reducing the harmful pressure from their whole vocal anatomy in general.

I could compare Tanya’s case with patients who I attend to in the past and who were recovering from different stages of stroke. Those patients did not have spasms, but their whole speech pattern (almost like Tanya’s) was basically erased in its entirety. So I had to teach them (as well as Tanya) to learn how to speak again with a completely new application of their voice, using a completely new modality of completely new behaviour. The latter (in many aspects of it) falls into the same fashion as Neuro-Linguistic Programming (NLP). Once such an endeavour described above is completed, the new horizons inevitably will be reached.

Stay tuned to hear more about Tanya’s progress for the next 30 hours yet to come! We are hoping to produce before-and-after instruction videos and bring it for your viewing. Tanya said that she is, and will be, open for your emails with any relevant questions to be sent directly to her. Meanwhile, she is enjoying the process while both of us, working hard, however smart, on the final goal to achieve the complete recovery of Tanya’s voice.
Neuro Linguistic Neuro Linguistic programming NLP SD spasmodic dysphonia Vocal Science voice disorder