November 05, 2011
What does Vocal Science™ method entail?
And what does it mean: "Vocal Innovation and Modernization", and why, in this case, it takes place...?
The answer is:
First of all, Vocal Science™ Method and its revolutionary voice/vocal technique allows the voice to work at the fullest capacity possible with positively no pain or strain on the vocal anatomy.
Second of all, It works wonders for the healthy voice, but if the vocal cords or the vocal box in general are already damaged (or pre-damaged), this technique will help to restructure the voice into a different set of muscles (facial/sinus cavities), which will play the role of the natural amplifier or resonator, while simultaneously being put to work in full conjunction and coordination with the abdominal muscles and where the latter will provide the support for the sound to be lifted off of the vocal cords and off of the vocal box, thus in turn, the use of the throat, larynx and the vocal cords will be minimized and practically eliminated.
In the case of the Non-Surgical Voice Repair, the natural herbs and remedies will be administered to greatly aid the healing of the vocal anatomy, which presumed that the latter had been released from the harmful pressure of the sound via the application, nevertheless, of revolutionary voice/vocal instruction.
Now My Reader, this is your riddle....  How does Vocal Science™ Method compares to conventional vocal coaching?
The answer is - IT DOESN'T!!!
Conventional vocal coaching suggests doing the exact opposite of the above - i.e., the useless exercises and scales are offered, which are drowning the voice lower into the vocal anatomy and, thus, disturbing such anatomy while inevitably causing its damage.
Those exercises are not applicable to any singing (and of course to proper speaking either) and therefore, nobody was ever able to figure out how to apply those, no doubt, "doomed" exercises which are not leading, by any means, to any desirable results.
Question - Does the Vocal Science™ method suggests to the artist to change their "natural", life long adapted habits?
Answer: NO, IT DOES NOT. However, the experience shows that while going through the process, the artist stops not only the bad vocal habits, but also naturally conquers bad habits like smoking, drinking and using drugs, whereas, no doubt, they negatively affected the flora of the throat. In fact, the Vocal Science™ technique is designed in such a way that the vocal anatomy itself is hardly engaged in producing the sound, and if it does, it does it in the absolute minimum capacity.
So, even in an undesirable scenario, where the artist employs bad habits such as smoking, drinking, using drugs or what have you, the Vocal Science™ Method and technique will be applicable and highly usable even in the instances described above.
With that said, it is not mandatory for the artist to change their familiar lifestyle and feel miserable while adapting Vocal Science™ Method and, needless to say, along with it, acquiring a very unconventional vocal technique.
NEVERTHELESS, THE VOCAL SCIENCE TECHNIQUE INDEED WORKS UNDER ANY CIRCUMSTANCES!
Since 1976 (graduating from St. Petersburg Music Teachers Collage) Vocal Science™ Method was born and took its first steps.
Today, in Century 21, via decades of extensive experience and expertise the Vocal Science™Method leaped to the next level, so to speak, and gradually evolved into "Forensic Science."
During that tremendous jump, it got fully reimagined and modernized and thus got consistent in its nature with Century 21 and possibly... Century 22! 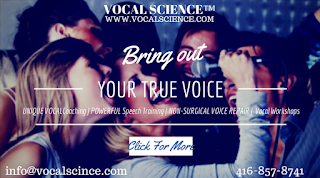 Reset your voice with the Vocal Science™ Method:

Utilize its very unique and powerful voice/vocal technique!
Discover and uncover your true voice!
Get rid of your physical and mental pain!
Become the best speaker or singer you can be!!