As promised, we would like to profile a few more people who suffered from one of the nastiest voice disorders - Spasmodic Dysphonia (SD).


First up, we have a testimonial from Zelda A - Spasmodic Dysphonia sufferer from Brampton, Ontario Canada: 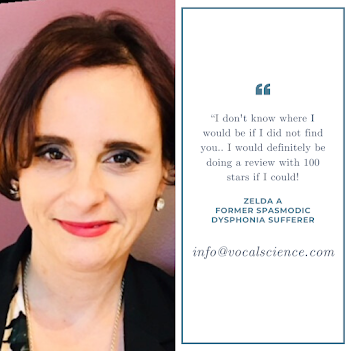 Hope for the Future.

“I found Diana by chance when I was looking for a more natural approach to my MTD (muscle tension Dysphonia) which, some time ago, I was diagnosed with by an ENT Doctor. I have been slowly losing my speaking voice for almost a year. I have gone to several doctors and also speech therapy without a solid resolution. It's like having laryngitis....X50, which never goes away!

When I started working with Diana, she right away told me that my voice sounds like I have a Spasmodic Dysphonia (SD). That was even more disheartening than the previous diagnosis of MTD. Diana right away told me that it is not very good news and that, conventionally speaking, is considered to be an untreatable voice disorder. However, the best thing happened when Diana actually offered me hope stating that after hard work, I will be able to speak normally again.

I depend on my voice for my job as I need to express myself; and, anyway, it is also a part of my personality. Imagine not being able to speak? I also have a hearing impairment which had never affected me the way my voice had. I'm usually an extrovert, but people began to notice that I have suddenly gone quiet.

This process of working with Diana has started to build up my confidence where I can feel like myself again. The teaching and methods Diana has is like no other. It takes time and a lot of hard work. Probably the hardest thing I’ve ever done in my life!

I also want to mention that in the last couple of days, I finally have heard people saying that I sound so much better than before. It's so good to hear that… a true blessing!

I recommend Diana's teachings, along with the herbal treatments, to anyone having any vocal issues. It's not an easy fix, but it will give those suffering with SD (or any other voice disorders) hope; and possibly, like me, they will finally see the light at the end of the tunnel.

Click the link below to see the before and after video:
https://www.vocalscience.com/zelda-a-spasmodic-dysphonia-voice-repair-testimonial

We would like to bring to your attention an informative testimonial which was provided to us by Tanya G - Adductor Spasmodic Dysphonia voice disorder sufferer from New Zealand.. this testimonial was formed after the completion of 50 hours of instruction and treatment. This testimonial contains a dialogue between Diana Yampolsky and Tanya.

- To read the testimonial, click HERE (or on the image above)

- To read her testimonial, click on the link above

- To read her testimonial, click on the link above.

To read his testimonial, click on the link above.

Thank you for reading!