What do we mean by that?We mean… NO singing and NO skating… per say. 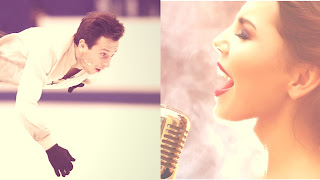 James Brown himself said: “ Of course, I can land ripples and quads, but not in the expense of the artistry!”

Given all that, in this case, the skaters themselves are revolting against “ice acrobatics” and overall “ice circus”, so to speak. They actually have been missing the artistry of their craft, as well as poise and grace, which had always made figure skating field a very special place where they had an opportunity to show off their very special skills (and not just very dangerous and vigorous jumps which, in turn, could, at any time, become very detrimental to their body’s anatomy and physiology).

I just watched a pre-holiday movie where the top female figure skater had been badly injured; and thus was attending an out-of-town rehab trying to recuperate and overcome her injury. In the midst of that, she had met an also badly injured (in the past) used-to-be well known, hockey player.

They became friends and throughout this relationship, they both realized that there is more to life then vigorous competitions which literally put their lives in danger, and leave them with one and only option to take the pain killers to numb the pain in order to get through their tasks…

It is sad indeed, as both sports require enormous human effort to reach the top and stay on top. The debatable question is… Is it really worth it? Evidently, both characters from the aforementioned movie came to the conclusion that it isn not; and, in my opinion, rightfully so.

Now, let’s look at singing, or the lack there of…

On the contrary, less and less effort to get on top of that game is required.

As shows like American Idol, America’s Got Talent or even The Voice, suggest that no effort is required or no “dues” should be paid by the artist, trying to climb to the top.

The message those shows are conveying:
“Don’t worry, you can easily get discovered; and then you will become an “instant star" after which, however, you might lose your voice.… But don’t worry…

It is a known fact that there is always another wannabe artist waiting in line.

So the organizers of those shows are not worrying too much…

However, if you get lucky and get on top, but still do not really know how to sing, no worries at all…

They will build you a forty million dollar stage.
They will hand you a self-tuning microphone.
They will play for you a pre-recorded version of your song backstage and teach you which peddle to press to get the sound to match your recording… They can even suggest some lip-syncing for that matter.

How pathetic is that? I am personally lost for words…

It has become clear that any real training towards vocal technique is simply eliminated; and it almost looks like it is completely obsolete these days… However, there is always a price to pay for the above, like for everything else in life.

The vocal technique was not present, and now the voice is lost and thus became non-functional. What is the next step?
The next step is a vocal operation.
Some of those interventions were pretty successful, but did anything change? In fact, it did… to some degree.

In 2012, the bleeding polyp was successfully removed from her vocal cord; and once the vocal anatomy healed (after she was ordered not to speak or sing for five months), she attempted to resume her singing career.

However, to her credit, she really did not want to do that, as being a very smart and down-to-Earth woman, she had the understanding that nothing (in reality) had changed.

The surgeons in Boston performed a very complicated vocal surgery and completed it with absolute excellence.

So Adele’s “instrument” got fixed; but what about the “player”?

Was she shown any different/new technique or application of her singing and/or speaking voice, for that matter?

So being forced to continue her journey, and then (5 years  later), she came to the same result. She could not complete her tour due to the new damage to her vocal anatomy.

On that note… should we be surprised?

In my opinion, we should not. In fact, I would be more surprised if it didn’t happen, because in that instance, it would be simply a miracle.

My take on the above is such.

I think that we should not try to adapt to the new standards and so called “progress” to today’s society. We should rather try to bring and implement the old, good, classic standards to the so-called “modern society”.

To see part one on the same topic (named “Neo” Classical Ballet…? What’s That..? Let’s Find Out… For Whatever It’s Worth!") please click on the title.
Adele Figure Skating speaking and singing Vocal technique Voice Loss Voice Repair