August 11, 2017
Nevertheless, over many years, we treated and cured a lot of people with all kinds of different speech and singing problems.

Some of the voice/vocal disorders were straight forward, but some of them not so much; and I really had to figure out what the exact cause would be in order to correct the actual problem.

Sometimes, there are clients who come with definite diagnosis, like, for example, a couple of years ago, we had a voice repair client from Brooklyn, New York who was diagnosed with solcus vocalis (gap between the vocal cords), 10 years prior reaching our Institute for Non-Surgical Voice Repair, here in Toronto, Canada.

So at the time of such diagnosis, he was 26 years old; and by the time he reached us, he was 36 years old. By the time he finally came to us, his voice disorder progressed to the point whereas the sound of his voice was very scratchy and very raspy.

Luckily, via specially designed by me speech exercises along with the application of the natural herbs and remedies, we were able to synchronize his vocal cords and put them in complete balance with his physical body.

So, as a result, the problem was solved in just 15 hours (3 consecutive days).
However, once the voice was lifted off of the vocal box, releasing the vocal cords off of the pressure of the sound, I begun to hear  something else which I had not heard before or even was aware about.


Underneath of all of this, the very serious voice/vocal disorder (known as muscle tension dysphonia) was awaiting…

In his case, it was absolutely impossible to detect it until the “voice lift” took place to cure the main voice disorder (sulcus vocalis) which he originally had come to us with.
It does happen (however not very often), but it does happen. Sometimes, there are layers of problems lying beneath the main problem (just like the onion has multiple layers where you take one off and there are many more layers beneath each other).
Surely enough, by the end of our 15 hour term, my client exclaimed; “My voice is so much better now, but my neck hurts.” That was a confirmation of my observations. At this point, him and I planned the next course of action; but unfortunately, it did not take place, at least not yet.

Two days ago, a young boy of 13 years of age walked into my studio. 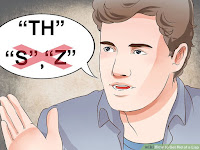 Before coming for what we call a “Diagnosis Exploratory Session”, as prior (for all his life and according to his mother) he was diagnosed by medical doctors with a lisp.

Interestingly enough, when I first spoke to him on the phone, I could not pinpoint what exactly was wrong with his speech.

That is exactly to the point why anything serious like that could not be diagnosed, or furthermore treated, remotely.

I was really shocked when he started speaking to me (now one on one  and in person). I realized that his problem is much deeper and more complicated then just a simple lisp. There were more then few letters he was pronouncing in a quite “twisted” way.

To me, it sounded that something happened during his birth which compromised his speech center; and nevertheless, respectively, his voice application to certain letters and syllables. I could compare it with some “twisted wringing” taking place in his case, which have to be straightened out and “rewired” to its proper state. The “short circuit in such wiring” also has to be fixed.

The whole voice mechanism has to be fixed and put in balance.

However… easier said then done, but definitely can be and should be done, as the whole life of the aforementioned child/teenager is also out of balance and definitely effects his confidence on every level.

The latter, in fact, is similar to my approach to the treatment of such disorders as Spasmodic Dysphonia (which colloquially, I named “Vocal Epilepsy”)

I am sure, my reader, that the above writing gives you a good understanding of how complicated the treatment of any voice disorders can be.

Both aforementioned clients went, for a number of years, to all kinds of ENT doctors, speech therapists, speech pathologists, etc, trying to rectify their voice/vocal problems.

Some of them got the right diagnosis, some of them did not. But none of those so called “medical specialists” were really able to put a finger on the cause of the actual problem, let alone suggest an appropriate course of action with respect of a proper treatment, let alone cure.