Vocally Speaking: Would you go to a Car Body Shop (instead of a car garage) to fix your car’s engine or transmission for that matter? 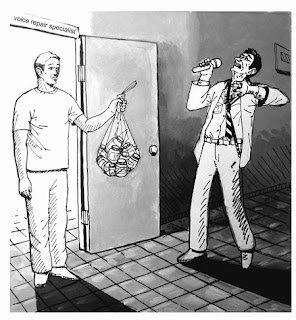 The answer is… if (God forbid) you were involved in a car accident and the body of your car got damaged, you would probably need to go to a body shop…. wouldn’t you?

However, on the other hand, if your engine or transmission were acting up, then you definitely would want to check with a qualified mechanic who, nevertheless, specializes in “car mechanics arts” in a manner of speaking.

One of my prospective clients had been diagnosed with two (nevertheless) voice disorders, which are clearly of a mechanical nature, as one of them is Muscle Tension Dysphonia and the other is named Sulcus Vocalis (unhealthy gap between the vocal cords).

Both of those voice issues are caused by a misuse of the voice i.e., by straining the vocal cords and pushing/pulling the voice out onto the surface; and instead, by default, placing it right into the neck muscles.

Needless to say, during those actions, Muscle Tension Dysphonia had been initiated.

Meanwhile, the strained vocal cords also got tired of being pushed and pulled constantly; and thus, they had been no longer able to ‘snap back together’ and close properly (The Sulcus Vocalis disorder then had taken place and the gap between the vocal cords had been created).

On this note, my prospective client started looking for alternative treatments; one of which happened to be acupuncture. In fact, by the looks of things, the session was performed by a very good and experienced acupuncturist.

My prospective client was very excited, as according to her, right after that, it was much easier for her to speak to her husband and her sun. On this premise, she right away decided that this was the answer to her prayers; and by doing this acupuncture work, her (nevertheless) two mechanical problems, will be fixed…?

In other words, like we said before, if it was about her car with broken parts under the hood, she would go to a body shop and wash, wax and polish that car in hopes that the engine (or whichever other essential parts under the hood) would miraculously be fixed.

Does the above sound realistic to you…my readers?

My answer would be that it is highly illogical, as if any problem of a mechanical nature occurred; the bodywork instead would not help to fix it.

Let’s (for example) take an athlete who, during a marathon, broke his leg.

Yes, indeed, he/she could attend all kinds of alternative treatments such as acupuncture, massage, physiotherapy and etc…

Yes, all of those treatments could ease off the pain and speed up the healing.

But would they be able to assist with putting all the bones, tendons and ligaments together so that the runner could start running again without any surgery, cast or crutches?

My answer would be…very unlikely! In other words, with the help of alternative treatments, the healing probably will also be enhanced, but in no shape or form, it would substitute the mechanical repair of the injured limb…

Similarly, in the case of my prospective client, the acupuncture actually helped to send the energy to the vocal box ‘chakra’; and therefore, the aforementioned person felt an exuberant energy directed to her vocal anatomy; and thus she felt (momentarily) the relief with respect of the use of her voice. Therefore the occurrence of such result is quite understandable and logical.

Would that solve the voice problem in the long run?

The answer is… NOT ON ITS OWN, but it could be a great help to the actual voice mechanics repair!
Diana Yampolsky muscle tension dysphonia strained vocal cords Vocal Science voice mechanics Voice Repair