Voice/Vocal Disorders Classic Diagnosis: Could vocal cords' health be affected by Acid Reflux...? Can that also be the root cause of Muscle Tension Dysphonia or any other comparable voice disorder?

Lately, more and more voice problems sufferers are coming to me with the most, seem to be, common diagnoses; Such as acid reflux negatively affecting vocal cords, and also (by osmosis) affecting voice performance, which, in turn, often leads to muscle tension dysphonia disorder, as well as any other voice disorders. 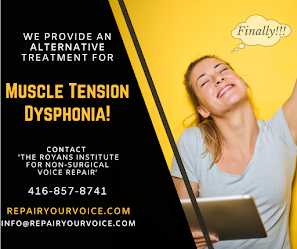 Are there, perhaps, any other voice/vocal problems that people also experience?
Of course, there are!
The rest of them, however, are much more pronounced; such as nodes, nodules, polyps, lesions, cysts, etc.

However, what appears to be interesting is that the person, let’s say with the hoarse/raspy voice, and not diagnosed with any growth on their vocal cords, is immediately labelled with one or the other diagnosis; either gastric acid reflux which is burning the sufferer’s vocal cords or muscle tension dysphonia (MTD), which affects primarily the quality of the voice (hoarse, raspy, breathy). Moreover, in the process, it gets locked into the neck muscles, and, nonetheless, constricts one's voice production. With that said, it seems (given the above), that conventional doctors, most likely, are implementing the method of elimination.

In other words, if there is nothing obvious those doctors could detect, they quite often offer the generic and most common diagnosis, such as those described above...

A lot of my clients come to me with problems which often require voice repair, coming with the diagnosis of acid reflux while, concurrently, obeying the doctor’s orders; they have been taking all kinds of anti-acids, changed their diets and etc., but, however, unfortunately, in the real sense, they did not achieve any feasible-tangible results. Those sufferers' voices remained to be still hoarse and raspy and, nevertheless, they still had no clue how to properly speak or sing to treat and mostly prevent such occurrences from happening again and again.

Yes, in some cases, the sufferers' voices could have been affected by acid reflux, but, although, it certainly appeared that it was not the main cause of their actual voice problem. It was just a side effect, as, evidently, their voice was drawn in a very low throat position via the wrong application of speaking and/or singing voice. While at it, they were also applying enormous pressure with their sound to their vocal box in general. 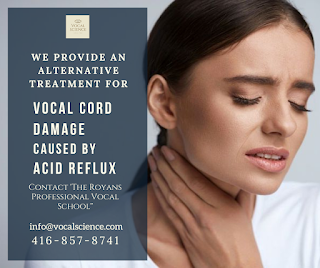 Once the voice is sitting low in its position (sounding very throaty and heavy), it will, no doubt, meet with the gastric acid and, thus, the vocal cords may get severely burned.
Given the above, it's evident, that the approach to any vocal problems/issues has to be completely holistic.

I was speaking today with a US client who had been diagnosed with Reinke's Edema (smoker’s disease). She was offered a vocal operation instead of the recommendation of stopping smoking, cleansing her body completely from the toxins, building the strength of her vocal anatomy and learning how to speak properly without putting enormous pressure on her vocal cords and vocal box in general.

Even if she agreed to undergo the vocal surgery, without the changes described above, it would be completely obsolete, as all of her symptoms will, most likely, come back in full force and, unfortunately, in a short period of time.

There is no change without change, so to speak. It is totally apparent that vocal surgery at that juncture would definitely not be a solution. However, in some cases, surgical interference is a must, but my recommendation would be to try everything possible and impossible (so to speak), to be rectified first Non-Surgically!

After all, what do you have to lose? If nothing else, you will gain knowledge and understanding about the voice matters. So, in the end,  you will come to the right decision which will be perhaps more effective, suitable and, most importantly, will leave you with comfort and ease!
speech vocal damage voice disorders Voice Loss Voice Recovery Voice Repair