Showing posts from February, 2019
Show all

We would like to share with you some excerpts from an email which recently reached our office. However, due to privacy concerns, we omitted some personal details. We regret, however, that this person did not reach out to us first and tried to rectify her vocal problem non-surgically. For those who suffer from the same voice disorder, we would like you to think twice before you choose vocal surgery over a non-surgical approach and treatment. There are a lot of consequences which could be experienced with surgical interference. We had numerous clients with various voice disorders who came to us after the surgery was performed - and some of them hardly could speak, let alone sing… Please see the aforementioned email below: "Hi. In 2013, I had an operation on my vocal cords ( bleeding polyp ) and I feel that it made my voice a lot worse. If I do a performance I am hoarse for two weeks or more. I have lost the melody in my voice and my "throat" hurts con
Post a Comment
Read more

Attention parents who have children and teenagers ages 16 and under! 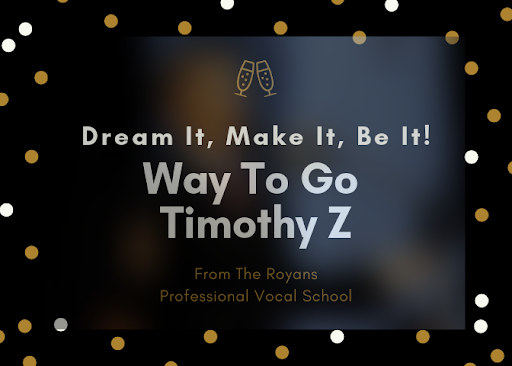 Attention parents who have children and teenagers ages 16 and under! This letter is a special addition: On this note, we would like to bring a story of our two recent students. One of the boy's name is Timothy Z (12) and the other boy’s name is Nurian B (13). Timothy's mom just sent us a post-course letter. It is, in fact, self-explanatory. _____ Dear Diana and Jamie, Thank you for being so patient and for being great vocal coaches. I have to say that when Timmy arrived for his first singing lesson, he was feeling quite nervous and anxious. But with your help and undivided support, he began to feel a lot more comfortable. I really appreciate how you took the time to make sure Timmy understood what you taught him, even when the lessons were inevitably going over the set hour and a half.   Timmy often came tired, with both school and competitive dance occupying most of his time, but with your kind help and fun attitude he’d re-energize and sing his heart out.  I
Post a Comment
Read more

This Time, Medical Doctors And Speech Therapists Had Failed The Patient With The Muscle tension Dysphonia Diagnosis!

The story is about “old” Maggie Y - now the “new” Ariel Y. Maggie Y came to us about a year ago to fix her breaking and crackling voice due to muscle tension dysphonia (MTD) voice disorder. Maggie told us her story and explained the reason why she thinks it happened to her. With her permission, we would share her story with you: She originally came from China and, nonetheless, had experienced all the consequences of immigration. Her parents were extremely stressed going through the process of immigration to Canada. Given all that, their marriage was quite-a-bit on the rocks. When Maggie turned 16 (she is now 24 years old ) the family situation became worse while Maggie, at the time, was attending high school. The parents were fighting everyday and Maggie, in order to stop their screaming at each other, was screaming and yelling herself day-in and day-out, obviously feeling upset and frustrated. Due to all of that happening, she began feeling tightness in her
Post a Comment
Read more
More posts