Vocal “Prosthetics” - What Do We Mean By That?

We are getting a lot of inquiries from people who suffer from various voice/vocal disorders. They are suffering from vocal issues such as: nodules, polyps, lesions, cysts, papillomas, paralyzed vocal cords and many other vocal problems.

Naturally, some people want to resolve their vocal cord growth non-surgically; and this is definitely the right thing to do. However, the majority of them outright presume that the minute they start adapting the new mechanics of the voice, combined with the natural herbal treatment, their growth will magically disappear, and moreover, in the nick of time nevertheless.

Yes, in more light conditions like, for example: pre-nodules or very small nodules/polyps, etc., they do disappear in a reasonably short time. The fact is that once the voice is lifted off of the vocal box and off of the vocal cords, it is no longer rubbing off of those cords; and once the appropriate herbal remedies (sometimes coupled with homeopathic substances) oxygenate the bottom of the throat enough, no growth will be able to live in that oxygenated environment.

Any sensible person (even with an average IQ) will understand what I am trying to explain here.

But, believe it or not, it is very difficult to bring it to people’s understanding. In fact, I have just hung up the phone with somebody who has been suffering with Spasmodic Dysphonia for 12 years!

The very first thing she had asked me was if I could treat her condition (nevertheless, Spasmodic Dysphonia, however, fairly, in a light form) with the herbal remedies…?

Also, when I had stressed the point (which I am trying to convey in this blog) that I would not be able to guarantee the cure of such a neurological disorder, but however, could guarantee at least 80% to 90% of speech improvement, she got very discouraged and, on that note, cut our phone conversation short.

She was also offered a discounted price (which is in force right now, due to the celebration of our schools 32nd anniversary).

With the price quoted, she nearly had a ‘heart attack’ and hung-up the phone very fast.  One more time again, this person has been suffering with her voice disorder for 12 years…? She, evidently, still has no idea what it would take to improve her speech.

Of course, we wish her all the best and, likewise, to many others; but she, unfortunately, had declined her one and only way to hear her voice sounding (at least somewhat) normal once again.

Now, I would like to give you an example, so that you could understand better with respect to what I mean by treatment and improvement VS complete cure of whichever voice/vocal issue.

Let’s take, for example, the case of the South African Athlete, Oscar Pistorius. 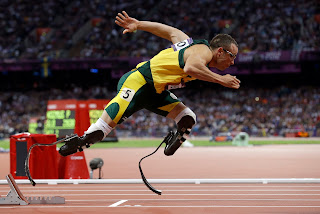 Due to a birth defect, both of his legs got amputated before his first Birthday; and ever since, he has been wearing prosthetics. Nevertheless, with those prosthetics, he became a great athlete and had been winning multiple gold medals (Olympic Games included).

With that said, could anybody in the world give him his legs back (to run and to win)? Needless to say, that would not be possible. But what was possible is to get the best prosthetics and get him highly trained to use those prosthetics as his own legs.

Similarly, it is ultimately the same of what I am preaching and advocating with respect of non-surgical voice repair treatments.

To conclude: I may not (in an instant) be able to fully cure your vocal cords growth, as it requires some time (if at all); but I will be able to treat your condition and bring your voice up to a  “high gear” so that, when you speak or sing, nobody will know the difference.

Isn’t that the objective of the above exercise?