Vocal Paresis - The Causes and Consequences. 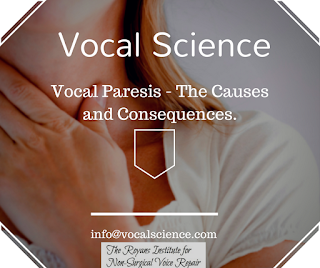 More and more, in my practice (close to four decades), I have been hearing about the devastating vocal disorder - Vocal Paresis, also known as Vocal Paralysis. The interesting thing is that a lot of other vocal disorders are usually caused by speaking and/or singing in the wrong (and often aggressive) way.

- Vocal Paresis, as well as Spasmodic Dysphonia, quite often have additional reasons for their occurrence. -

Interestingly enough, I hear a lot about some kind of a virus (or even a simple cold) that had produced vocal paresis affecting one or even both vocal cords. When a person is under a lot of stress, their immune system subsides which means that they become more susceptible to all kinds of infections, colds, and needless to say, viruses.

A couple of years ago, a client from Atlanta, Georgia came with one paralyzed vocal cord, which occurred after he experienced a really severe strep throat condition. However, this person was a pastor who travelled internationally, giving speeches and leading worship conferences and also, quite often, employing his singing voice.

So in this instance, the cause for the Vocal Paresis was not only the Strep Throat itself, but also the wear and tear on my former client's vocal anatomy, as he definitely did not use his voice properly and thus misused and abused his vocal anatomy.

So the "marriage" of the two conditions resulted in Vocal Paralysis.
In his case, his throat became the targeted organ which he had been using the most due to his professional conduct.

We also had a former client who was a professional Rock singer; and in the middle of his recording, his voice (in a manner of speaking) "snapped". However, he continued pushing it to the max until he could not push it any longer. He underwent 3 operations; and at the last operation, he was offered a synthetic device to be implanted into his right vocal cord. That device, along with the previous voice abuse, paralyzed his vocal cord for good.

That's when he came to see me. I was able to fix his speech, but I was not able to recover his singing voice. However, nevertheless, with great difficulty, I was still able to produce noticeable improvement.

When the vocal cord is paralyzed, with my method, I restructure the voice in a different set of muscles and do everything in my power to go around the actual injury. However, on the other hand, the vocal cord itself needs some sort of "physiotherapy" (vocally speaking) and I need to produce some flexibility and movement on that cord, which by itself is very challenging, but thankfully, in majority of cases, not impossible.

The fact is, that the initial sound has to go off of both vocal cords, therefore, the movement of both vocal cords is required. However, depending on the severity of paralysis, I can always make the healthy vocal cord compensate for the ill one, and make the sound primarily go off of that one. The next step is to direct the sound to the set of one's facial muscles, which will amplify the sound quadruple times over... provided that the abdominal muscles are employed to the max (especially in the case of Vocal Paresis) to help the sound to reach its aimed destination.

- The role of the abdominal muscles is such that they have to produce a proper "lift of the sound" ( the height) to assure its needed support, as well as the "body of the sound", which will assure its fullest capacity (the width). -

--
There are other bizarre accidents that people described to me which also caused vocal paralysis and had greatly affected their speech (one of them included a "chainsaw gone wild" during a construction accident!).

Somebody we had previously treated had fallen on a bicycle's handle bar while being pushed by a car from the rear.
--
The above (almost unbelievable accidents we have dealt with) are just to name a few.

So, there are many circumstances which could produce this nasty condition; the consequences of which,  unfortunately, could cause a devastating vocal disability.

However, on a positive note, it can definitely be improved, and in some cases, quite significantly!