They said that “You will never have your voice back to normal ever again.” We said… “TRY US!”

With the Vocal Science™ method and its own very unique vocal technique, we have proven quite a few medical professionals wrong! 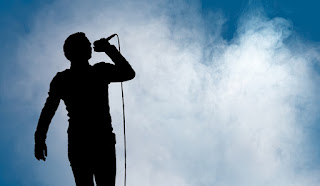 
The above-named non-surgical voice repair client of ours was given a “sentence” of “the point of no return”. The ENT professionals were stating that many of our clients (formally theirs) would never recover their speaking and/or singing voices ever again…

With the above in mind… let’s profile a throat cancer survivor named Tim Bristol.


Some time ago, he came to us seeking a viable solution for his very serious voice problem, after surviving throat cancer. Tim has been a musician, singer/songwriter (at the time) for over 45 years of his life. From his words, his whole life had mainly revolved around music. Also, from his words, while performing on many stages, which he was playing from, he saw nothing but “blue light”. So, needless to say, the constant second-hand smoke was inhaled by Tim, night in and night out… So at his early 60’s, he was diagnosed with cancer of the throat.

Tim, nonetheless, undergone many sessions of chemotherapy, as well as numerous radiation treatments. That left him with a very raspy and hoarse voice and with numbness (loss of sensation of touch) on his fingertips. In both instances, those were very devastating outcomes of the above-mentioned treatments, as not only Tim was a singer/songwriter, but he has also been a very prominent guitar and bass guitar player.

When he asked the doctors what he should do about that, they responded - “None of that matters… Please be grateful that you are alive!”. That was not good enough for Tim, as without playing his guitar and singing his songs in various bands as before, he did not see the meaning of his life down the road… So, he eventually found us. In just 10 hours of our private instruction and natural herbal treatment, he regained his voice. For maintenance, he also attended our healthy voice/vocal workshop, at that time, consisted of two full days of instruction. We concluded his recovery, located in our office plaza, Karaoke place. Once Tim sung a chosen-by-him song, he got a standing ovation.

The owner of the place came up to me and asked why I had been hiding such a great singer and never brought him to sing to his place before…? I revealed that he - along with my other voice repair client from Maryland, USA - were both just here with me for a few days to fix their voices. The owner of the establishment said: “Hahaha… Voice Repair…” - Which was clearly implied that I was actually not telling the truth. I was stunned for a minute, but then started to laugh, as it was a perfect testimonial for me - where the previous damage of my clients’ voices could not, at all, be detected! 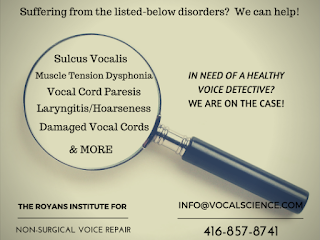 Tim’s wife, who was also a singer/songwriter, was completely fascinated by the whole thing and came from Niagara Falls New York to visit us (just for a day) in order to personally witness this fascinating process herself.

At this moment, we are not in communication with Tim himself, which we presume is a good thing, because if he needed us, he would have found us by now. So, from our end, we are certain that he is all good and is continuing singing and playing music for many years and months ahead. From his own words, Tim said: “Diana, You had proved all those doctors wrong! My voice is getting better and better every day!”

If you are in need of non-surgical voice restoration and enhancement of the quality of your voice; and also wish to acquire a new healthy voice/vocal technique, Contact Us - We will be happy to help!

Vocal Science™
We Got This! 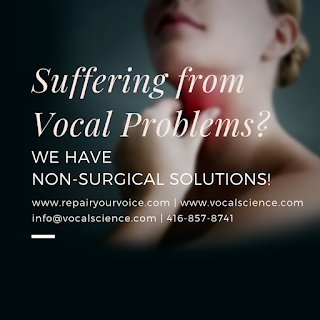