Vocal Disorder. Speakers and Singers. Do you have what it takes to conquer your voice problem? 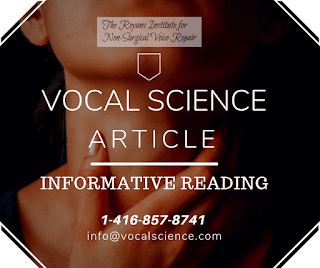 When the vocal disorder occurs, whether you are just a speaker, (regular person), or a singer, it is always a devastation to say the least.


For those who are not singers, it appears to be even more devastating than to the actual singers who have lost their singing voice; sometimes their speaking voice as well, and possibly, at least temporarily, lost their singing career, which a lot of the times they have been working on all their lives for. You would think that the process of voice recovery would be easier for people who just lost their speaking voice, but interestingly enough, it is exactly the opposite. The fact is that to recover your voice out of any voice or vocal disorder, takes a lot of strength, a lot of energy, sometimes quite a bit of time and money as well. It is a very tedious process, syllable on syllable and word on word. Especially those with muscle tension or spasmodic dysphonia seem to be suffering the most. They have drawn their voices in a very low position, starting with the neck muscles and below.

During the process of the recovery of their voices, their dysphonia is constantly sucking them back in in their necks, shoulders and chests. I call it a “vocal swamp”, where like in a real swamp; the person is desperately trying to swim out of, but being constantly pulled back in. It could be extremely frustrating for the sufferer, as the muscles from time to time are locking in on them and thus, not allowing the voice to come out fully out of there and on the surface.

Sometimes, the voice does come out, but by their description, it still feels like the muscles are tightening up which, in that case, the feeling is only echoing back, and in that instance, the exhausted brain and body are playing their nasty role on the sufferer. Now, what will it take to get better or, furthermore, completely recover from this nasty voice injury? First of all, a lot of understanding is what has happened and why. Second of all, a lot of understanding of what requires coming out of that, so to speak, voice prison, where the person ended up, voluntarily or not. And lastly, it requires a lot of physical and mental strength to power the voice back to its regular state.

Yes, with singers, we have 2 things to do:

To recover their speaking voice first and then re-teach them how to sing properly and not only complying with standards of professional singing, but concurrently preserving their voices for the rest of their singing careers. As strange as it sounds, and at the glance, it should be much harder to work with the singers then just with ordinary people teaching them how to speak again. However, those regular people with speech disorders never have been facing before such an intense instruction, employing such a big effort on the way to their voice recovery. On the contrary, the singers have been through a lot of drills such as: rehearsals, performances, recordings and etc.


So, naturally, they are accustomed to all kinds of, so to speak, drills and also accustomed to the hours of hard work on their craft. So go figure, but that’s the fact and I derive this information from my practice with ordinary people and singing professionals. The ordinary people with speech disorders are, by far, more emotional and taking it much harder than the real troopers – singing performers. And those are the facts from my extensive practice! The process of voice recovery is definitely not for the faint of heart. Is it do-able though?


The answer is yes, but only if the sufferer will find their inner strength to go through this ‘not very easy at all’ process.
dysphonia performers recovery singers speakers vocal disorder Vocal Science Vocal technique