Vocal Science – Non-Surgical Voice Repair: Surgery or No Surgery? That is the Question.

I, personally, also had a similar question when I was offered by two (quite prominent) dentists to pull out my three (near the front) teeth.

One of which (granted) was pretty broken, the other one was slightly damaged; and the third one was previously “treated” by a dental surgeon and, as a result, that tooth appeared to be crooked and shortened to the max… I did not know any of this, as I was quite heavily sedated.

When I woke up, nevertheless, I had to face the results and that was quite the surprise…

That very doctor and then the other one who I went for a second opinion, wanted to pull out three teeth, put the implants on two of them and a crown on one. Moreover, the office manager of the first one, when I came in, I thought for an appointment, cancelled it outright and recited to me that I had six route canals to be done and redone! 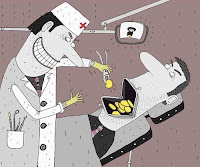 Luckily, by fluke, I found a third dentist named Richard Lee-Shanok who happened to be not only a nice and down-to-earth person, but also a great specialist who, for less then $2,000.00, fixed all of those teeth (and then some) without any pain or strain and without any artificial hardware (or plastic-ware) residing in my mouth.


I am forever grateful to this wonderful dental specialist! (A dental wizard, nevertheless).

The moral of my story is such: DO NOT AGGREE to ANY surgeries, implants or any other physical augmentations concerning your vocal anatomy, until you know FOR SURE that there is no other way to FIX your vocal problem.

Nevertheless, sometimes there are situations, which cannot be addressed non-surgically; and at that time, vocal surgery could be considered.

If there is any growth on the vocal cords and they are not getting any smaller (or disappearing in a reasonable period of time) after the non-surgical holistic treatment, they have to be addressed surgically, as if left alone, they, with time, could become cancerous.

If the vocal surgery took place, the post-surgery care should be administered to assure the proper healing and the proper use of the speaking/singing voice, so that no growth (or any other vocal problem for that matter) could occur ever again.

The moral of this blog is: Get the straight facts about your vocal issue and look and find the least invasive and most viable (preferably non-surgical) solution.
acid reflux artist development fix your voice Joan Rivers love your voice paralyzed vocal cords vocal issue vocal Problem vocal surgery Voice Repair