Showing posts from August, 2019
Show all

August 29, 2019
This is a case study of Ashok N - Former Non-Surgical Voice Repair Client of South Africa:
Ashok N, of Indian descent, came to us from South Africa in 2008. We were actually supposed to receive this wonderful, smart and educated man in 2005. In order to come to us, Ashok applied for two visas, where’s his wife and son were included - the one was for the UK and the other one was for Toronto, Canada,Due to the fact that he included his family, he was refused both visas - and only ended up with us three years later and finally arrived at us in December of 2008.
The fact was that Ashok owned three companies: - one in South Africa - One in Botswana - And one in India
To run those companies, it was required for Ashok to do public presentations and run rather large workshops and seminars. He did so for quite a few years until he strained his vocal cords and thus his voice started to sound raspy and hoarse - also causing him a lot of throat pain. This wonderful human being tried absolutely everythi…
Post a Comment
Read more

Suffering from voice disorders like Sulcus Vocalis, Muscle tension Dysphonia or, perhaps, even Spasmodic Dysphonia? We can help! 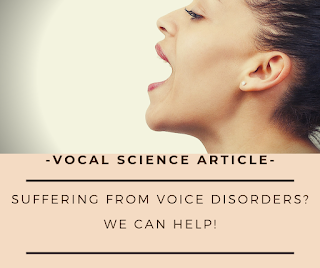 We specialize in a unique form of voice restoration and enhancement - designed for those who suffer from voice disorders, vocal disorders, vocal cord damage and speaking and singing voice problems overall.


Since 1984, we have serviced over an estimated 25,000 (combined) students and clients who have been coming to us for non-surgical voice repair sessions and treatments.

The school originally started as The Royans School for the Musical Performing Arts. Since 1987, we started specializing in singing and speaking only. We stopped teaching piano, guitar, violin and other instruments. So, given that, the school got renamed to the Royans Professional Vocal School.

In 1989, I myself acquired an, evidentially, emotionally-induced vocal problem. I have to say that, at first, I had tried to rectify that problem via help offered by medical professionals - but, unfortunately, to no avail.

Luckily, by a company named Nature’s Sunshine, I was addressed to a place which used to be called Health…
Post a Comment
Read more

Then, evidently, life became much more stressful due to (at that time) an enormous demand on human skills. Like figure skaters and gymnasts, the singers and speakers started experiencing a lot of trauma caused by various injuries in their field. By the end of the 80’s, my own stress took over my life and I too was ex…
Post a Comment
Read more

The Royans Institute for Non-Surgical Voice Repair, under the umbrella of The Royans Professional Vocal School, for over 36 years now, is offering one-of-a-kind vocal rehab to those with various voice disorders.

We have - estimated over 25,000 - speech and singing students as well as various clients coming to us from all over the world for non-surgical voice repair tutelage and natural herbal treatment to rectify their voice/vocal problems.

Especially for those who come to us from out of town/out of the country, we provide a full term of private care, and not only for their vocal condition(s)…


We provide our clients with:
Accommodation during their stayTransportation (if needed) to and from our studio With complimentary lunches With the initial voice repair herbal kitAnd now, even offering a supplement for their flight to us Of course, some conditions apply to the above.

___________
During their stay, we advocate our own Government trademarked method named Vocal Science™; and it’s…
Post a Comment
Read more

What Is the Nature and also the Cause of Spasmodic Dysphonia? Case Studies:

Is Spasmodic Dysphonia always the cause of a spasming and/ or generally-malfunctioning voice, or could it be just multiple - and very nasty - symptoms induced by the injury(s) occurred within the vocal anatomy?

Over many years, I have been tending to numerous of people with the diagnosis of Spasmodic Dysphonia (SD). I would like (down the road) to present to you (my reader) several cases with different causes, treatments and outcomes after all of the above:

About the latest case of Tanya G, you already know in general that Tanya came to us to Toronto, Canada all the way from New Zealand in hopes of the complete recovery of her voice from her Abductor SD.

In a nutshell, below is Tanya’s story:
Tanya told me that before such occurrence, she was a ver…
Post a Comment
Read more
More posts