A HOLISTIC Approach To A Person's Vocal "Instrument".


What do we mean by that?

Throughout the last 33 years, I have been bombarded with phone calls and e-mails from people who have experienced voice or vocal problems. Some of them thought that it had happened to them "out of the blue", so to speak; and moreover, without any indication (whatsoever...) of that happening. A lot of them had attributed it to some colds or viruses; and only some of them had agreed that their lifestyles had not been exactly "clean and shiny"... However, (and nevertheless) the severe cold, virus and especially strep throat, could be a trigger to a mild or even serious voice disorder.

As it appears to be, those people tend to eat a lot of fast foods, tons of dairy (which produces a lot of mucus), consume a lot of salty and spicy foods, which affect the throat flora, and evidently, also indulge in smoking, drinking and even drug use. Some of them (on top of that) do not know how to conduct their voices properly while speaking or singing for that matter.

They are using their voices incorrectly; pushing them out of their necks and chests, while concurrently (very poorly and wrongly) conducting their posture.

They are putting pressure onto their pelvises and their upper backs are pointed backwards, while the whole weight is mainly distributed to the lower back, which also does not do any favours to the condition of the lower back either... And surely enough, the majority of them have suffered from lower back problems and some had even shown signs of scoliosis or (already full blown) other spinal disorders.

Almost all of them had no idea that they had to breathe before they say or sing a word; and also, of course, between the phrases while speaking or singing. In other words, if the plane (God forbid) runs out of fuel, it will most likely crash.

I have numerous examples where the person had come into my studio in complete despair and was wondering why their voice got stuck in their throat (or thyroid for that matter) and had no clue (in a manner of speaking) what to do about it.

The thyroid, according to holistic teaching, represents suppressed emotions and hurts.

So almost 100 out of 100 voice repair clients had been experiencing some mild (or even severe) emotional distress.

They also did not associate their voice problems with their poor diet and constant chemical pollution ingested into their bodies.

They had been going to the conventional doctors, or even specialists, and they had been advised to do all kinds of nasty procedures such as: Botox injections into their necks and throats, (or their own fat injections derived from their stomachs or whichever other parts of their bodies) or even injections of teflon into their vocal cords!

My recent client from the US had a synthetic device installed in his right vocal cord which completely paralyzed it and ,nevertheless, prevented him from ever singing again.

It seems that nobody looks into the person from a holistic point of view.

Now this polluted and broken "instrument" has to be cleaned, tuned and repaired; while concurrently, the "player" (speaker or singer) has to be re-taught how NOT to damage that precious "instrument" they own - again and again.

The knowledge of the above will no doubt provide confidence; and mainly, safety, health and longevity of one's body and voice. 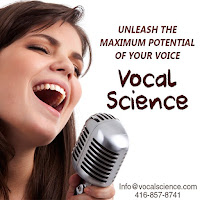 If you find yourself struggling with voice/vocal performance or are in need of non-surgical voice repair, you can reach Diana Yampolsky personally via email (info@vocalscience.com) or phone, (416-857-8741)
cold poor health strep throat vocal coaching Vocal Science Voice Repair